Offwidth invert #36 and a new route

Pat and I met up with Kurt and Kev for some new stuff that Kevin scoped. As we explored, I stumbled upon yet another OW invert roof...Kinda like Spinning in the Wind(Spin to Win) in Vedauwoo, though longer...turned out to be harder too...The main reason was to do the hand to fingers thing Kevin found. He graciously gave Pat the first go and Pat promptly onsighted...Kevin quickly clipped up the prehung gear as well. All in all a really good day, except for me smacking my noggin on this overhang...my head still hurts... 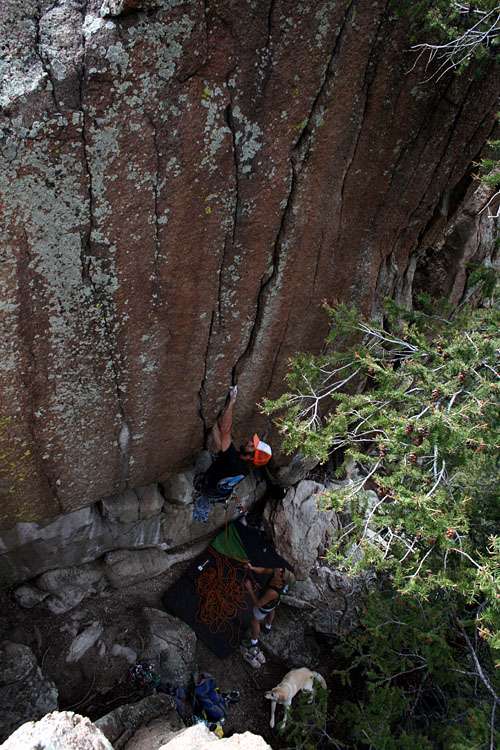 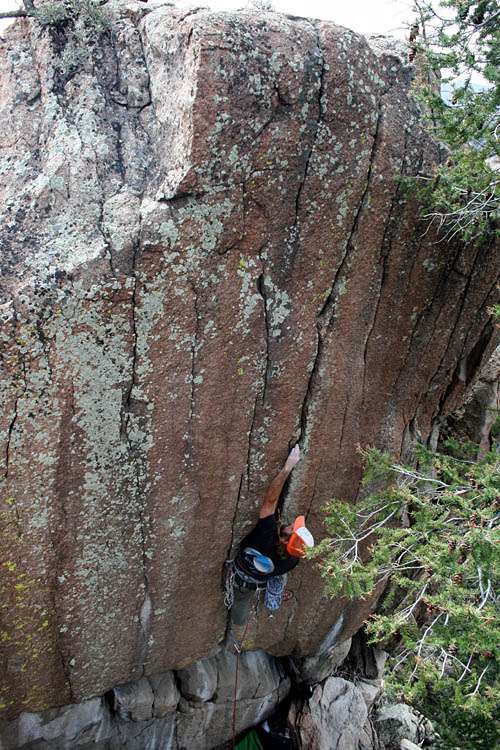 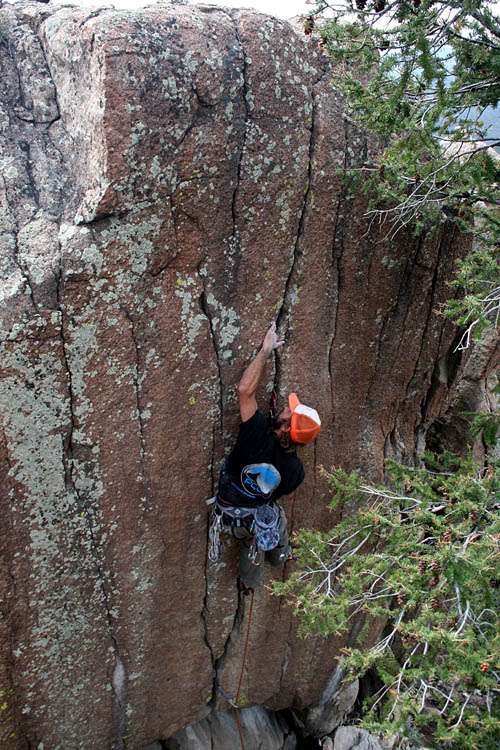 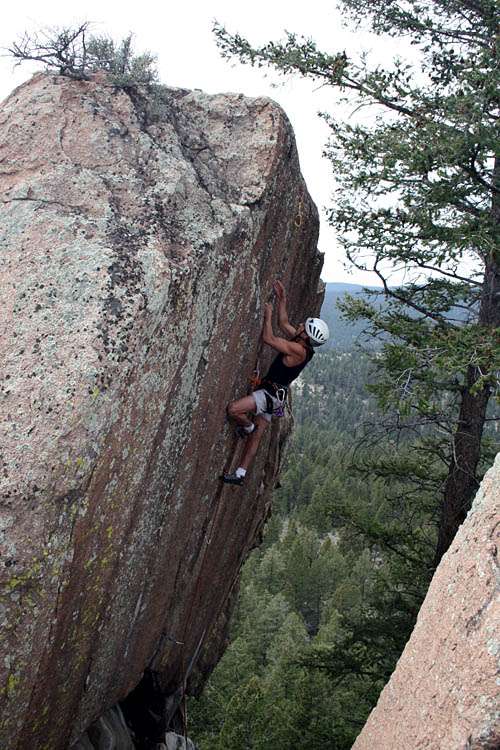 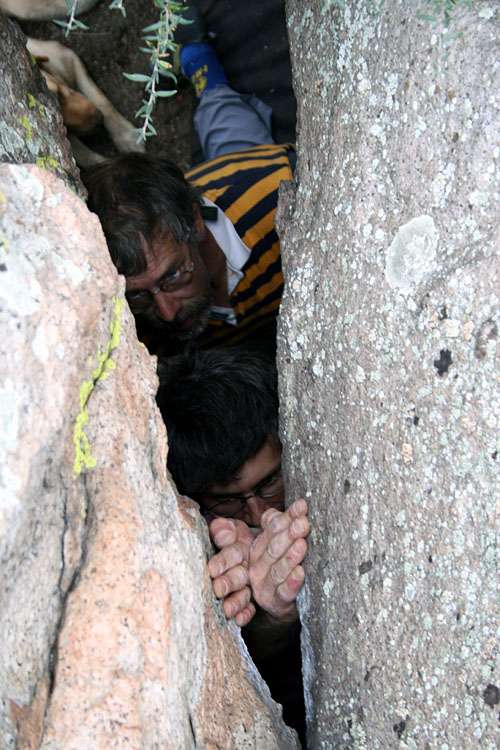 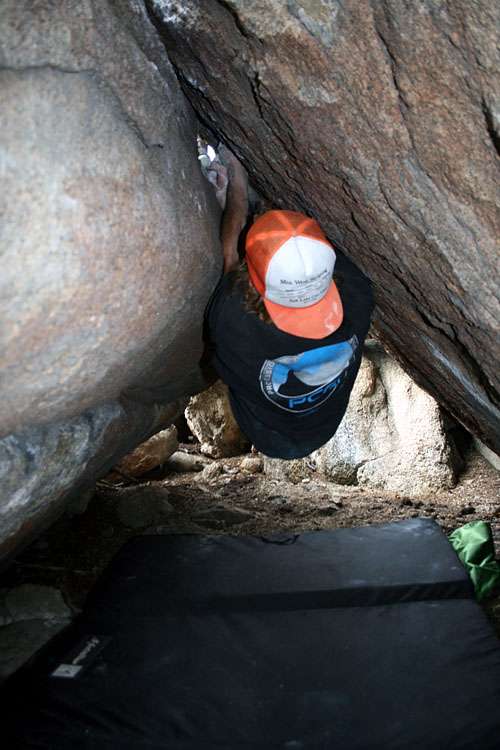 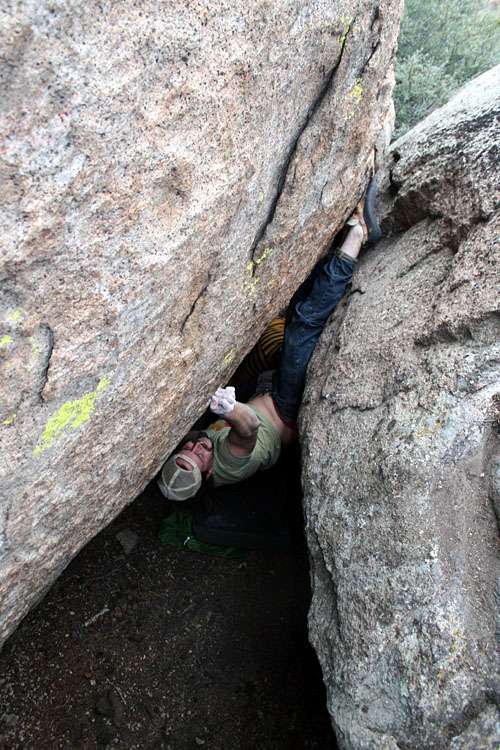 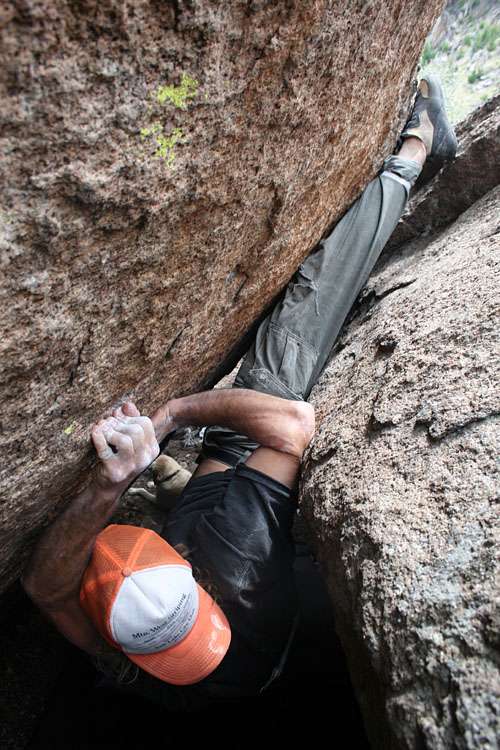 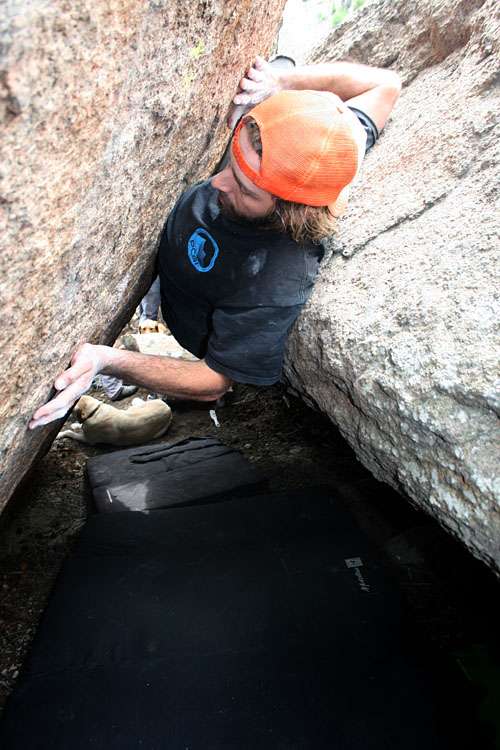 Sorry, my darling daughter Lyddie, but today Laddie just plain got down after it. Something clicked for him today and he really felt comfortable on the stone. Sorry for all of the kid's photos, but sometimes their climbing achievements need to be noted.

Warming up on a friction slab

Using some fancy footwork to send the problem

Steep-slab to vert with jugs--one of his more proud sends of the day, IMO

Wisely knowing his limitations, he backed off this climb, but watch out next year...
Posted by edejom at 10:42 PM No comments:

A botched lunch with Molly in Whitehall led to a quick outing on the pebbles with the kids. I wanted to peek around the Toll Mountain area and see if there were any near road-side climbs for the kids. With minimal walking, we found a few:

Ladd was the warrior for the day...

Lyddie on the death grip crimps

Nothing remarkable, just another good day out with the kids.
Posted by edejom at 5:00 PM No comments:

I had walked/scouted this area and ridge back in the snow months. Tom decided that the place was worth a walk-through and assembled the crew of himself, me, Pat, Ron, Clay, Scott, and Roxie the deaf white wonderdog to indulge on the environs. These are a few captures on the day:

Ron warming up on a short one

Pat on the second of the "2 Left Shoes Crack"

Me pullin' on some honkin' knobs--only to find that I didn't have the guts to top out the left slab, leaving me with the downclimb alternative

A fine day a another new playground area--lots to be done in this zone/sector...
Posted by edejom at 9:51 PM No comments:

A day on the steeps

Surprisingly good weather on the East side of Homestake Pass, left the crew with some time to take on a few steep/overhanging crack projects.

Where is this man's mid-section?

And who is this man spotting?

Pat shows us how to do the problem properly...

Moving on to the Halfway Creek Crack:

...and heading towards the lip

Posted by edejom at 7:44 AM No comments:

Linked up with Hutch, Cilley, Ron and Pat for some good times on the stone 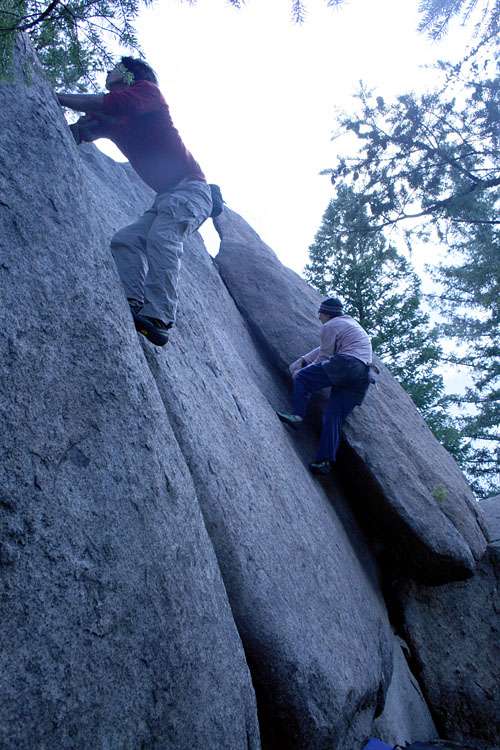 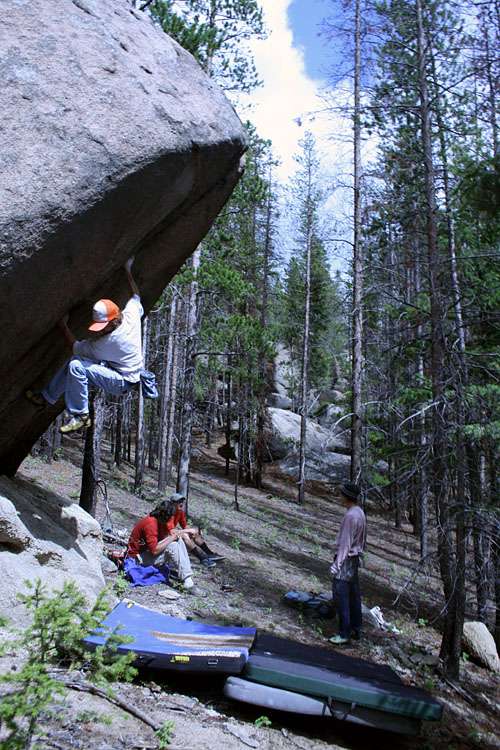 Pat on the FA(and another lap for the above shot) 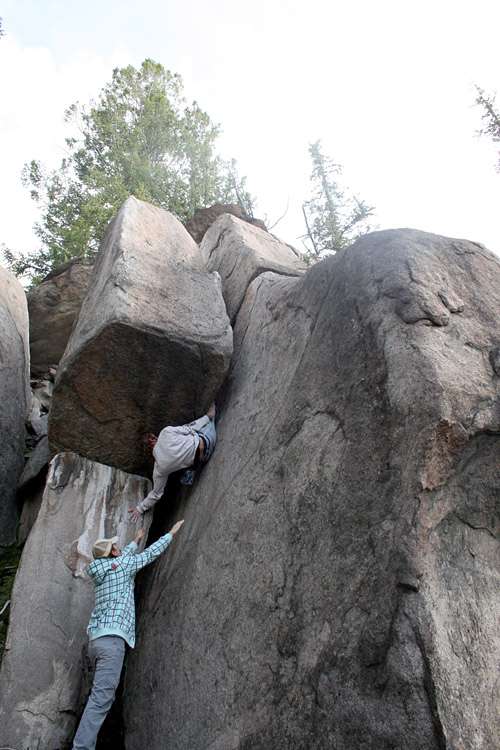 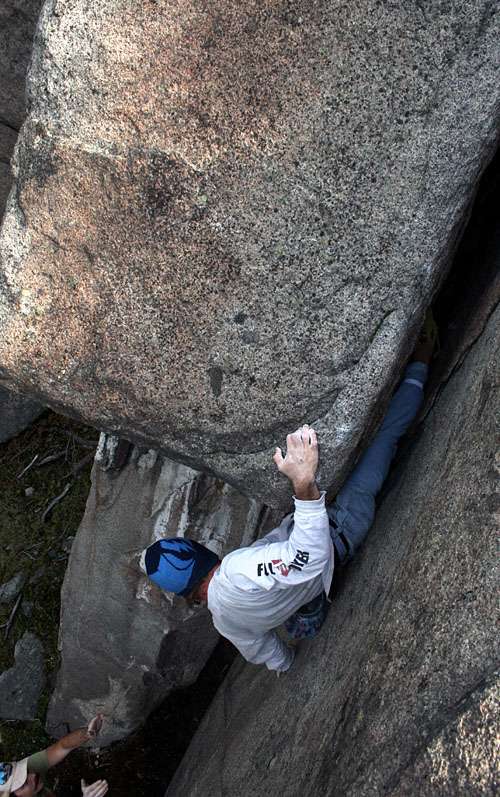 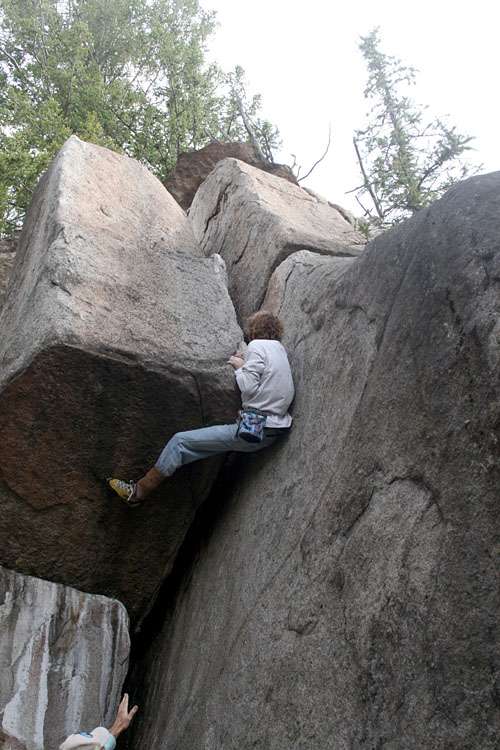 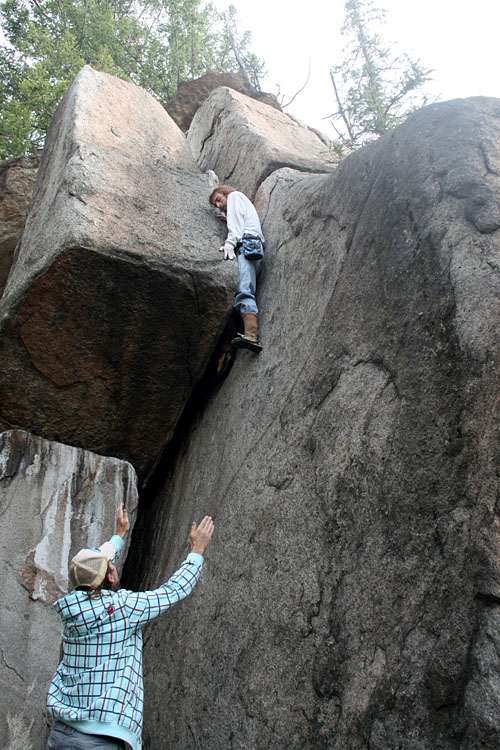 Cilley with a delicate repeat 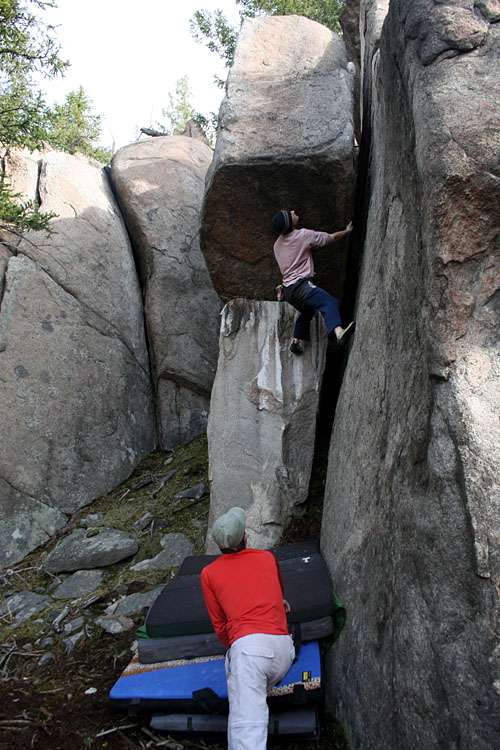 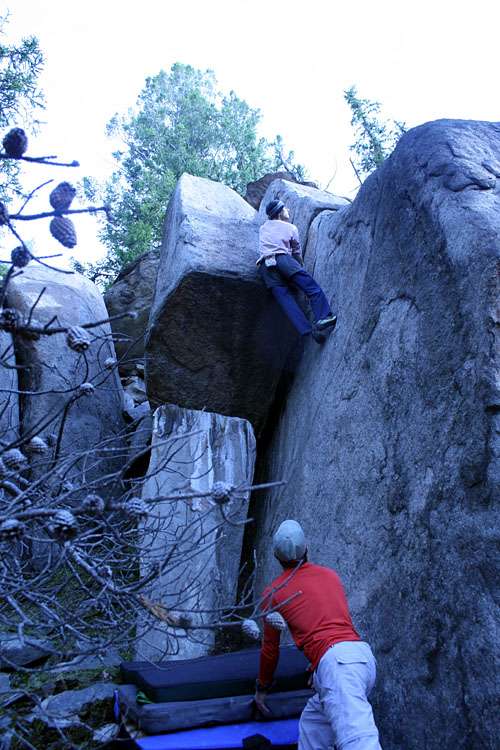 For the last week, visiting dignitary Dick Cilley has been sampling the Batholith delights. After plenty of solo exploration under his belt, Dick contacted me to do some trad climbing at Spire Rock. He dispatched with a few area classics, then led 3 other seldom-traveled stouter climbs to end the day.


The next day, Tom, Pat and Ron came over and we met up for some bouldering action.

Dick feeling out the jams on this difficult project

FA on this OW

Pat succeding on the second ascent of the longer of the pair.


A pretty good two days spent sampling some really fine Batolith offerings. Dick is supposed to be around for a few more days--let's see what else we can do.
Posted by edejom at 8:57 AM No comments: