On Saturday, though the conditions were tough, a good sized crew ventured into the Desert for some wintry pebble pulling. Though the temps were decent, the midweek temps were too low to allow much in the way of melt off.

After a brief warm-up, we decided to head back to the Airship Arete project....though I think I was the only one returning to it...Gee, Dylan, Mike and Dom had yet to pull on it...This was my 2nd real day on it...the 1st being last week.

After a fair amount of work from the fellas and I, Gee Alsenz unlocked to moves and topped out in snowy conditions! Nice one Gee! He reckons it weighs in V5+ or so...I'm waiting for slightly drier conditions. Though with the 10 day forecast being in the 40's for much of it...I'm thinking it will be sooner than later. 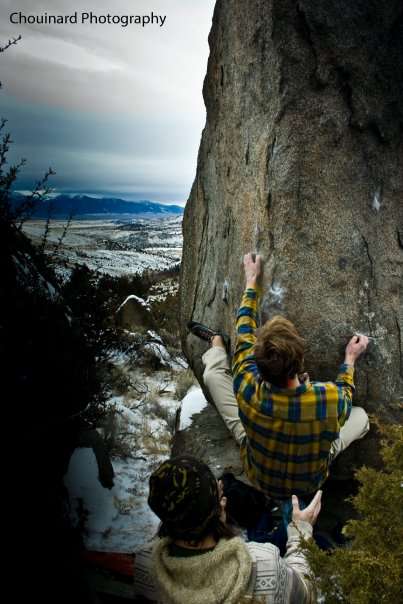 
The Zoo crew had to jet, reinforcements arrived late day and we ventured to the Outback Boulder for some more...


Note: Dylan took these pics, check out his blog at

TK
Posted by TKingsbury at 7:53 AM